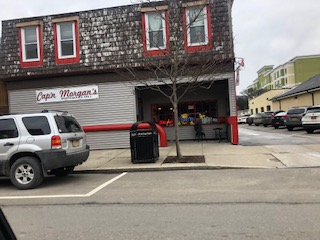 There is a video trend going around YouTube right now where creators go to badly-reviewed businesses such as restaurants, barber shops, makeup artists, plastic surgeons, tattoo parlors, and more to review them more honestly. The premise of the video is often, “Is this place really as bad as these internet reviews describe them to be?” After watching many of these videos, I’ve learned that the reviews are often exaggerated or twisted forms of reality. Usually, as the saying goes, the truth lies somewhere in the middle. I’ve found this content to be particularly interesting and entertaining, so I have decided to get in on the fun myself using this blogging platform given to me through my internship.

I headed over to Yelp in the hopes of finding a poorly-rated establishment in Corning to give a more realistic and maybe even redeeming review of. This is when I stumbled across Cap’n Morgan’s, a sports bar located on Bridge St. in Corning. The Yelp page provided me with some captivating reviews:

“Server got my order wrong and made a snarky comment when I told her it was wrong” – Angela W. of Savona NY

“Not a good place, run the other way and save yourself” – Craig C. of Elmira, NY

“Absolutely the worst. Several times now my friends and I have gotten almost raw wings” – Bryan K. of Brooklyn, NY

Slightly entertained by these reviews, and definitely intrigued, I wondered if this place could really be as bad as the Yelp reviews said. Is Cap’n Morgan’s a disappointing bar and eatery, serving up attitude and raw chicken? Or is it really just your average downtown dive bar that people tend to expect too much from?

I took it upon myself to find out.

I used a 1-through-5 scale and judged off 4 different categories:

The time had finally come to actually go and try this joint for myself. Because I refuse to actually go somewhere and sit down to eat alone, I brought along my trusted companion, Ethan, who was just excited that I was going to buy him wings and let him pretend to be Gordon Ramsey, which he usually does anyway. Ethan’s opinion was also useful, as I did not tell him about the negative reviews. I did this for two reasons: 1) to keep him unbiased and 2) I knew if I told him what others had said, he wouldn’t go.

The atmosphere was sort of awkward at first, we walked in to no greeting, just eyes, and we both felt a little out of place. I think if the bartender had acknowledged us, we would have been more comfortable. Despite this initial awkwardness, our waitress handled us well and quickly got our orders. After sitting there for about five minutes, Ethan pointed out the lack of music, which was confusing until about ten minutes later when we found out we were lucky enough to be there on karaoke night. This satisfied the need for music and made the place a little more lively. Actually, once the karaoke started, Ethan and I started to have fun – something I hoped would happen but didn’t really expect after reading the reviews.

To be thorough in our investigation, we ordered three different types of wings: “hot,” lemon pepper, and garlic. We also got an order of fries to share. The food came out in an acceptable amount of time, and over all was pretty good. The garlic wings weren’t too greasy, as they tend to be at other places. The lemon pepper was solid, the fries were crispy and delicious and the water didn’t have that weird taste like it does at some restaurants. My only negative observation regarding the food was that I ordered “hot” wings, and halfway through my half dozen I realized my so called “hot” wings were not spicy. I took into consideration that they could possibly be considered spicy to some, maybe I am just desensitized to hot food. Despite this, I think the fact that it took me so long to realize this says something as to how good the wings actually were. Personally, I can forgive the lack of spice for wings that are crispy with the right amount of sauce. Ethan agreed, the food was good. After getting his opinion, I filled him in on the negative reviews (I left out the “almost raw” wings part), to which he replied, “weird.”

Concluding comments: Cap’n Morgan’s achieves what it’s meant to in my opinion, meaning, it isn’t fancy. It is mediocre when it comes to service and atmosphere, but if you are looking for a place to drink, eat good wings, and have a good time, Cap’n Morgan’s is certainly a good option.