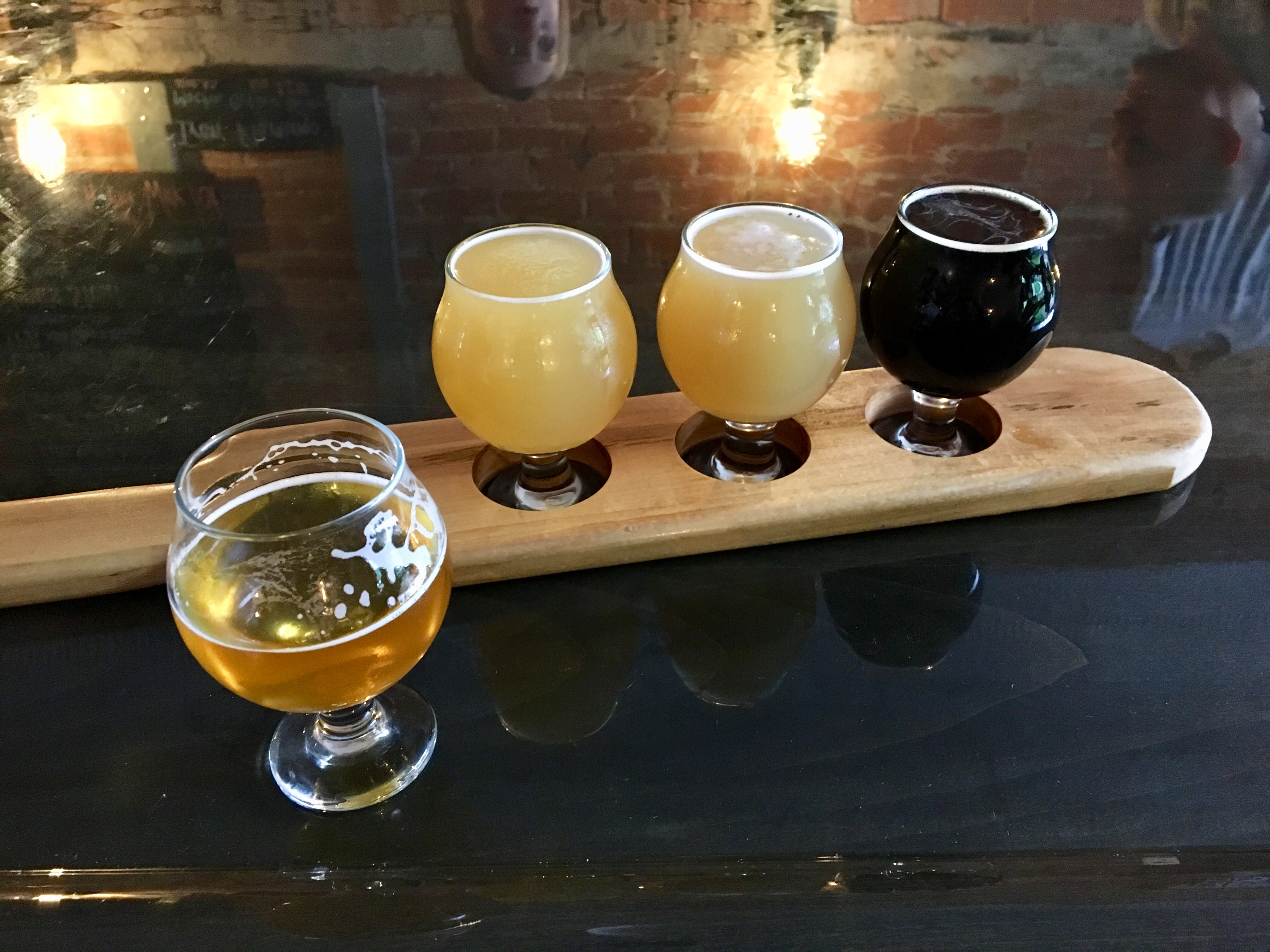 Almost two months ago, I received a text from some friends letting me know that Liquid Shoes, the brewery we had been anxiously waiting to visit for months, was finally open for business. Just a few hours later, I was at the bar enjoying the first taste of what would quickly become one of my favorite local beers.

The moment I walked through the front door, I could tell that Liquid Shoes was “my kind of place.” The atmosphere was every bit as welcoming as I had hoped it would be, and the decor definitely piqued my interest. Exposed brick, Edison bulbs, and visible tanks give it that industrial interior design vibe that a lot of my favorite breweries and taprooms – from Bissell Brothers in Maine to Burling Beer Co. in Vermont – seem to have in common. With a very large front window and an open air concept, the brewery seemed more like an extension of Market Street, rather than a new and unfamiliar space. I felt right at home.

During that first visit, the brewery was exceptionally busy. Though the bar was standing room only, and I was a few rows behind those who had already bellied up, it took less than a minute for someone to notice that I was waiting to order. Surprisingly, and much to my appreciation, the bartender actually walked around the bar to take my order and then again to bring me my flight. Since that first interaction, I’ve been consistently impressed with how friendly, knowledgeable, and conversational the Liquid Shoes staff members are. That first evening, I must have spoke with five different people, from the owners to the waitstaff. Each have remembered my name, and continue to greet me with a smile and a handshake before pouring the beer they instinctively knew I would order.

And that brings me to the beer. Finally.

The reason it has taken me so long to write this article is that Liquid Shoes’ beer is just too good. Yes, too good. During my first visit, I ordered a flight of the blonde ale, pale ale, IPA, and stout. I took detailed notes as I sipped each one. I commented on their color and flavor profiles, labeled them as “juicy” or “chewy,” and even went as far as to come up with witty puns and metaphors to use while describing them. I was going to tell you that the American Blonde Ale, with its slight sweetness and light amber color, was “light and crushable” and a “perfect introductory brew to craft beer.” I was going to suggest that anyone who enjoys cold brew coffee couldn’t possibly not love Liquid Shoes’ irresistibly smooth Shoe’s Stout. I was going to compare the East Coast Pale Ale to a refreshing summer’s breeze, and I was going to say that the IPA was hands down one of the best – if not the best?– small batch IPA’s I’ve had outside of New England.

I was going to tell you all of that, but then I couldn’t. Before I even had a chance to sit down and actually write out my thoughts about the beers, they were gone. Sold out. Too popular to remain on tap for more than just a week or two.

The East Coast IPA was replaced with a bonafide New England IPA, and I was going to tell you that that?had become my favorite IPA. And again, almost before I could write that very sentence, it was gone. It was replaced with a Summer IPA, which was replaced with “Kung Fu Bicycle,” which was replaced with “Jungle Bridge.” Even now, literally as I’m writing this, Liquid Shoes has released yet another new brew; this time a Double IPA named “6am Drum Solo” that clocks in at a whopping 7.9% ABV and what I’m assuming, from the messages on my phone telling me to get to the brewery ASAP, is a whole lot of deliciousness.

Each of those aforementioned beers were just as good as, if not better than, the ones that came before them. They were so good, and so popular, that very few of them lasted long enough to enjoy more than once. I can guarantee that “6am Drum Solo” will meet a similar, much deserved fate.

So maybe the real story here isn’t how “good” Liquid Shoes is, but rather how “consistent” the beers are. A colleague just reminded me that anyone can get lucky now and then and craft one or two good beers, but it takes some real talent to consistently release great beers. That’s exactly what Eric and Dave Shoemaker, the brothers behind the brewery, have done for the past two months.

In conversations with the brothers, I’ve learned that brewing beer has always been one of their passions. I also learned that each batch they’ve ever brewed, whether it be in the backyard or the garage or in the new brewery space, has been given the same care and attention. They don’t experiment just for for the sake of experimenting. They don’t plan on stepping out of their wheelhouse and personal interests just to match trends and please the Instagram crowds. They know what they make well, and they want to continue to hone that craft and brew the best possible beers. With that mindset, it’s really no surprise that Liquid Shoes has been so consistent.

I have a feeling that the last two months are just the tip of an enormously large iceberg of what’s to come from Liquid Shoes. If they keep up the trend of only releasing high quality, delicious, craveable beers – of which I’m most certainly sure they will – craft beer fans are in for a real treat. 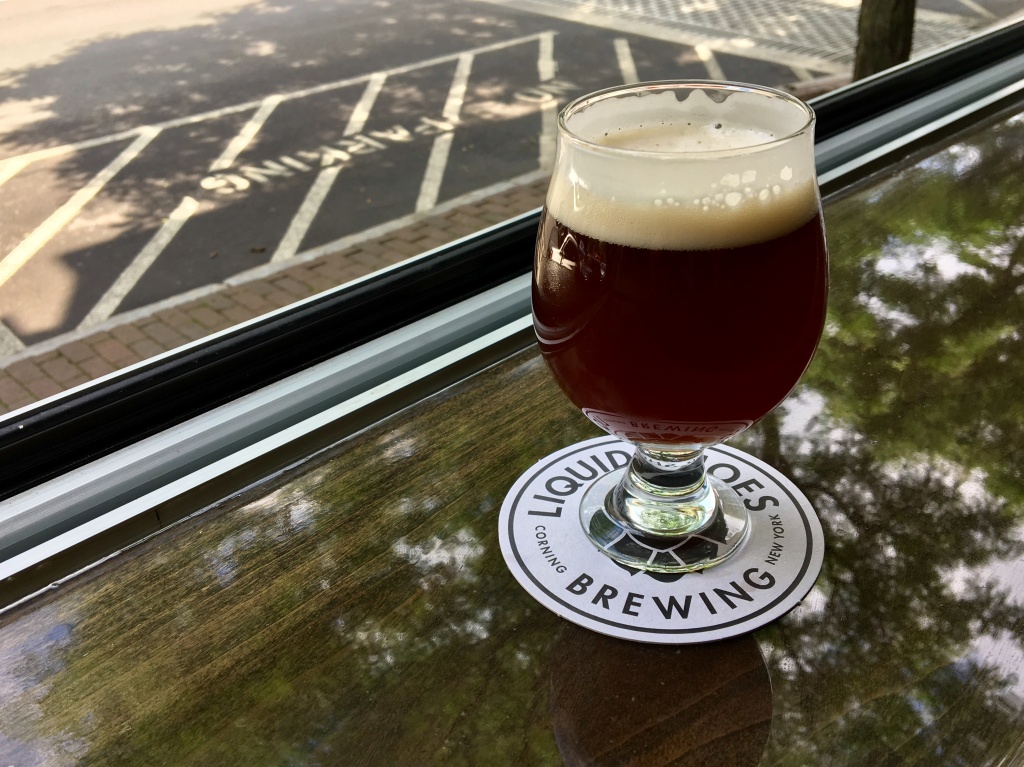 Enjoying a Liquid Shoes Brown Ale and a beautiful day on Market Street, courtesy of the brewery’s open air design.

Liquid Shoes’ new releases do come and go ridiculously quickly. We definitely recommend following the brewery on Facebook and Instagram to stay up to date with what’s on tap and other brewery news.