This is No Ordinary Basement Kegger It’s a good time to be a beer drinker in Corning. ?While the sheer volume of watering holes may have been greater?during the factory heydays, there have arguably never been more quality selections available on tap locally. ?Just this week The Cellar joined The Gaffer, Hand+Foot, The Site, and others featuring tasty varietals and esoteric micro-brews vom Fass.

For local suds we’ve got?the venerable Market Street Brewing Company, the now year-old Iron Flamingo, and at least?two additional breweries slated?to open?later this year. ?But perhaps some of the most interesting?beer in the City?is?being brewed up in the basement of a Northside home. Dane Jack began cooking up IPA’s on his kitchen stove in 2007 – after receiving a 5 gallon home brewing kit from his brother. ?Several years later Chris Giordano joined him to create?what has become a formidable team on the regional home brewing landscape.

What began as a casual, social activity (hanging our with friends, making beer for fun) has grown into everything short of a commercial enterprise. ?The operation is now capable of making twelve gallon batches (on what larger breweries would call a pilot system)?and has produced just about every type of beer at least once. Dane built and wired this custom control panel himself

They’re high-end hobbyists who?don’t sell their beer, and?Jack and Giordano?keep careful track of the amount they brew in order to keep annual yield?under what would be?deemed commercial brewing (which requires special zoning).

Dane and Chris are both professional glass artists, and seem to put the same creativity and passion their “day jobs” demand, into their brewing. ?Applying a combination of art and science has helped them improve their skills (and in turn the beers they produce), but they?emphasize that anyone can do it. ?”You?can make the process as simple – or as complex – as you want it to be, ” Dane told me. ?Looking around the basement it’s easy to see they’ve personally steered towards the latter. ?When asked how much they have invested in equipment and supplies at this point I was told, “too much.” 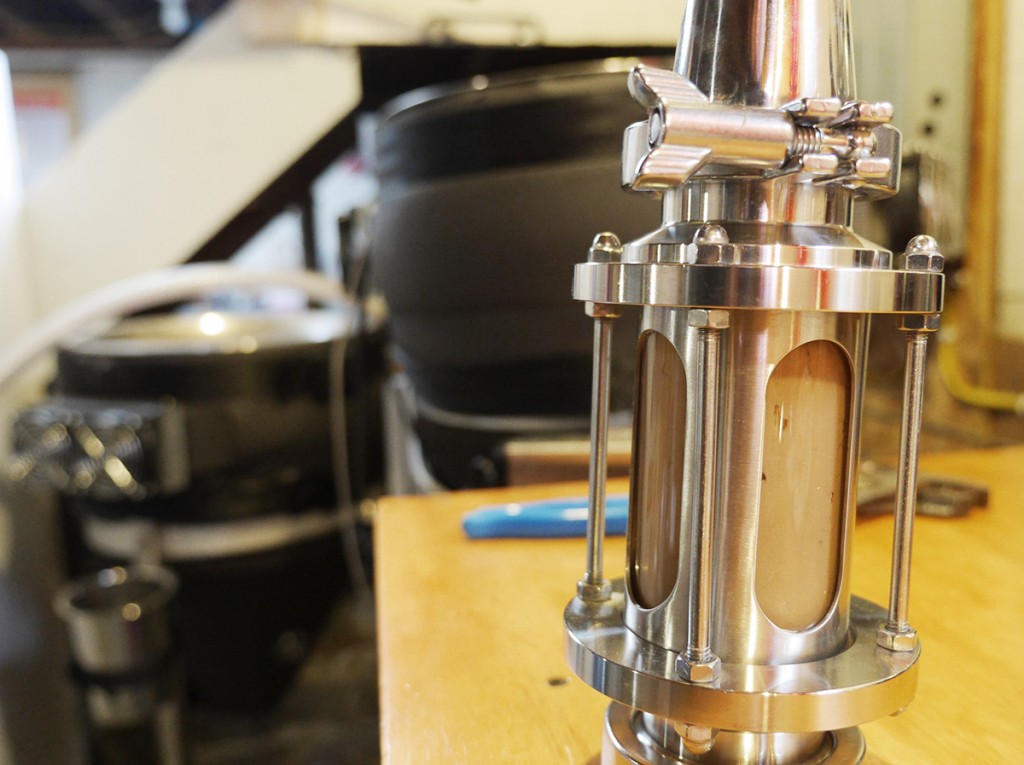 I forgot what this thing is called, but it holds yeast and looks badass

My own basement holds?golf clubs, a bunch of boxes, and a?bike with flat tires – and seems like quite the underachiever in comparison to this one. ?Every corner, every nook, every cranny holds something beer or brew-related. ?The equipment and supplies are a combination of off-the-shelf purchases (many from local outlet?Sunset Hydroponics and Home Brewing in Consumer Square) and custom-builds. 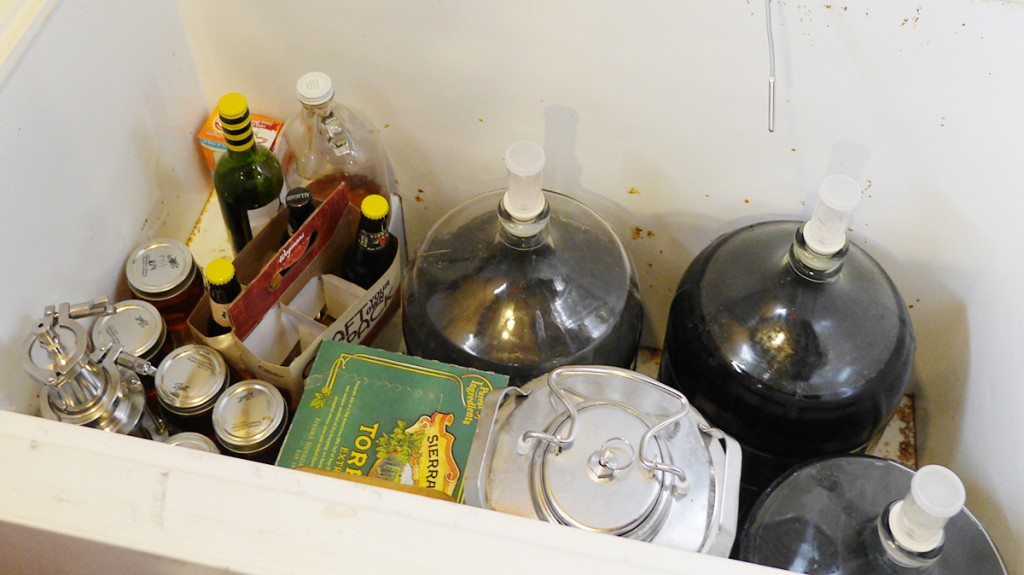 Brewing even the simplest beer takes two weeks (before its drinkable). ?They’re currently into Belgians, sours and others?which might require as long as a year to ferment, so they brew all year ’round using a safe, electrical indoor system. ?It has taken planning, time, and patience, but they’ve developed a rotation of aging casks so?that something fresh is always ready to be tapped. 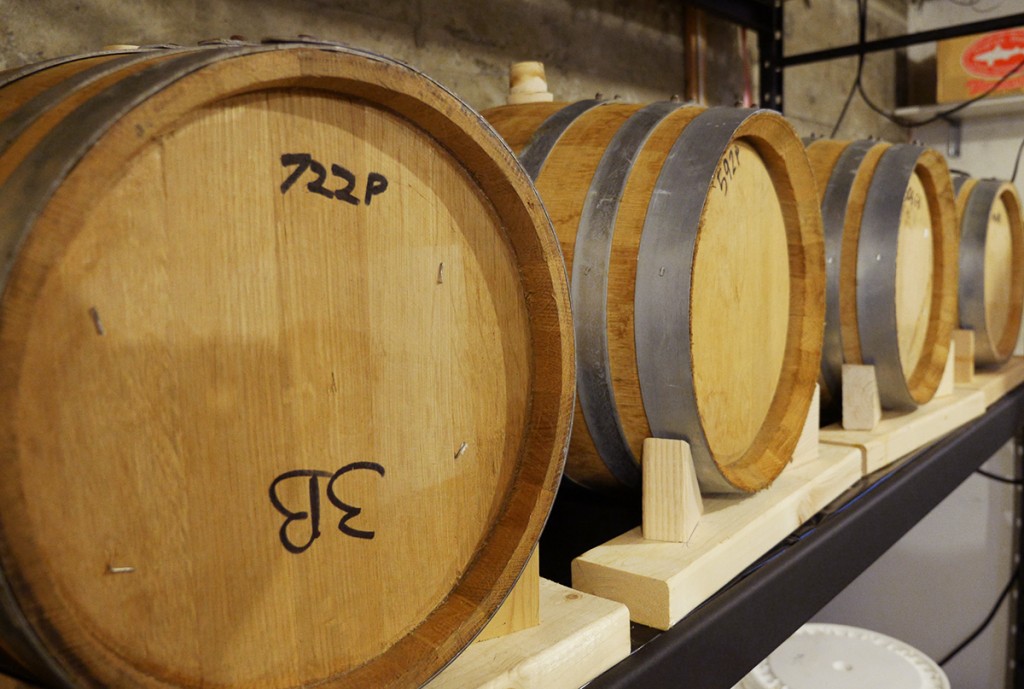 I was outnumbered – or yes, I would have hammered a spout into one of these and stuck my head under it

As cool-looking as all of the equipment is, they stress that the logbook has become their most valuable tool.? Since the basics of beer-making are so rooted in chemistry, recording details (such as ingredients, measurements, timing, and temperature) has been crucial to their efforts to refine the process and create top-notch beers. 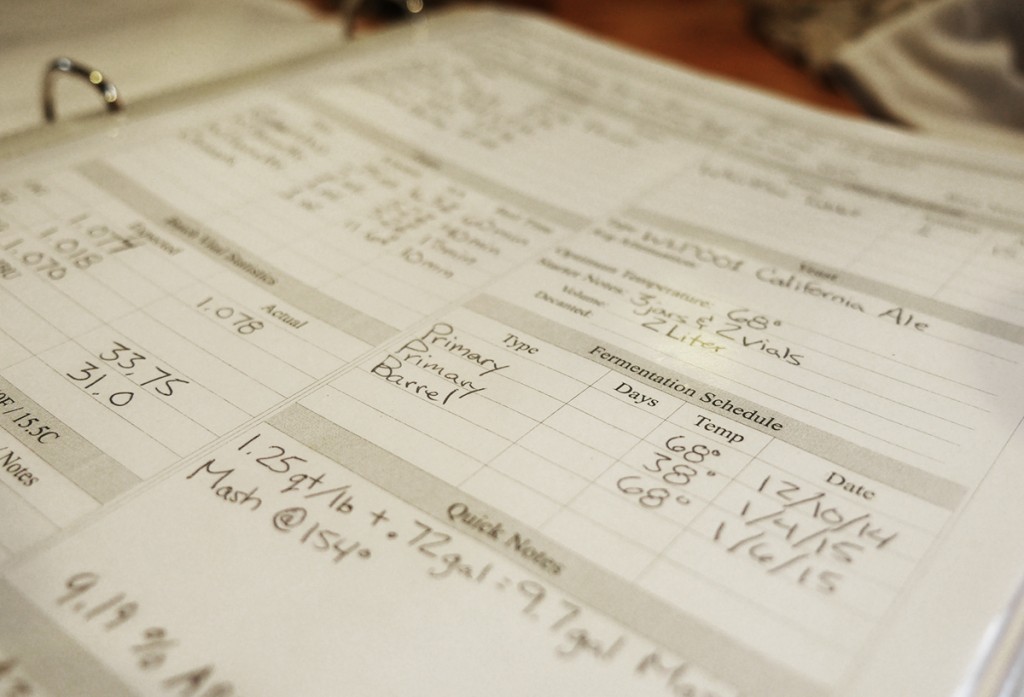 Notes on brewing a California Ale How serious are these two about their beer? They’re actually growing their own hops in the backyard.

There are probably some neighbors you’d prefer not to know what goes on in their basement, but?cheers to these guys for?making their downstairs the high point of the house. I love the smell of Russian Imperial Stout in the morning…