The Kitten That Brought Market Street to Its Knees 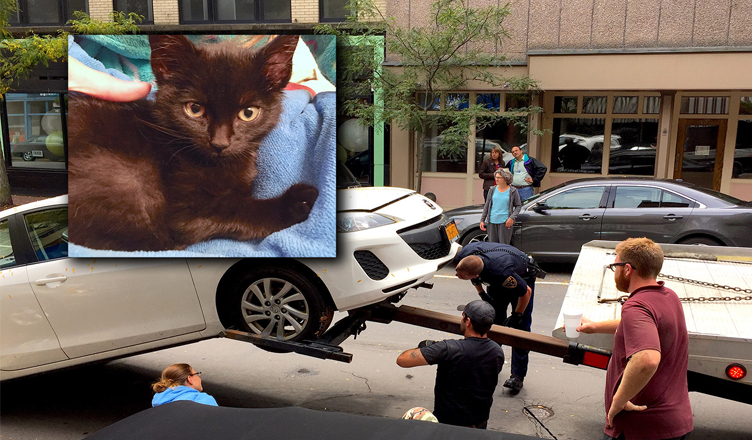 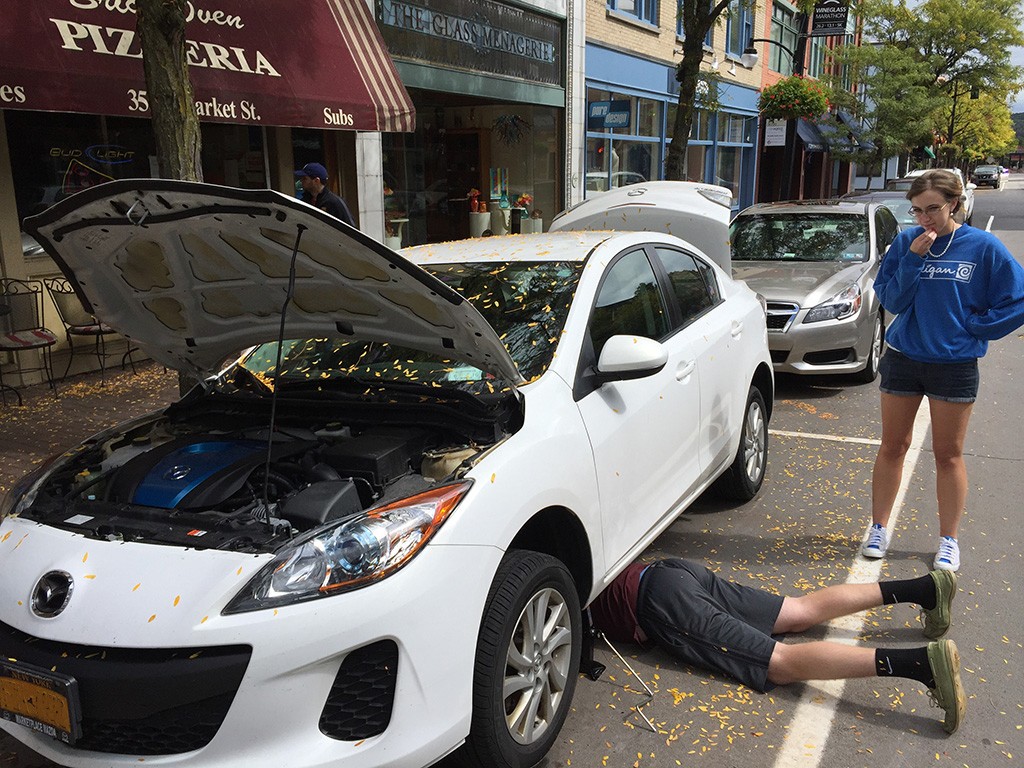 A?stray kitten spent a weekend car hopping throughout Corning. ?”Lily” has since found her forever home (presumably being kept as an indoor cat). ?We?were on the scene two Sundays ago when Lily was extracted from her last?automotive?shelter?- as were quite a few other members of the Corning community. ?Each of them now has a good?cocktail party?story to tell. ?But for the true inside scoop, we went straight to the source and?sat down with the trouble-causing tabby?herself:

UC: The first confirmed sighting we have of you was in the parking garage late that Friday night. ?Emmet Orr and Molly Mulligan say they heard meowing and scoured the garage. ?Finding nothing, they drove?home – only then did they discover?you sitting on the battery under their hood. ?Why didn’t you jump out when they were calling for you?

Lily: Calling for me? ?I heard them walking around the garage looking for some lost cat. ?I felt sorry for whoever that was, but I was all good and tucked in for the night. ?They obviously didn’t hear me?meowing, “quiet down, I’m trying to get some sleep here!”

Lily: You call them car engines, I call them homes. ?Safe from predators, warm and cozy, mobile, conveniently located all over the city. ?I don’t need a lot of space… I’m a kitten.

UC: So when Emmet and Molly popped their hood and offered you food and water, you took off into the night. ?Do you know Emmet looked all over the neighborhood for you?

Lily:?I appreciate the thought, but I really just wanted to get back downtown. ?It was way?too late to eat anyway… I would have gotten terrible heartburn.

UC: The next sighting came Saturday morning. ?Kathleen Speicher was running on Market Street and did a double-take when passing the doorway of Connors Mercantile. ?She stopped and approached you, but you ran across the street and into the engine bay of the Bento ya Masako minivan.

Lily: Well I wasn’t so much running away from her as I was running towards a van owned by people who make sushi. ?I’m a cat, you do the math.

UC: Apparently a small crowd gathered and Masako’s husband went through the trouble of driving the van up onto sandbags so he could crawl underneath and try to coax you out.

Lily: Well he was trying to hand me a golf club, but I’m not a big sports fan. ?Nevertheless, I figured a minivan was probably a bit too big for a kitten. ?I spotted something sportier and went for it.

Lily: Wood? ?I heard it was Della Sala.

UC: It is now, but when she parked on Market Street that morning, it was still Wood. ?She was at Fringe Hairdressers getting ready for her wedding when you “checked in” to her car. ?Amanda emerged to find a small army of folks gathered around her car who explained the situation.

Lily: Yes, and she looked absolutely beautiful, but by that time there were just too many people around… and I’m not big on crowds.

UC: Even a couple of mechanics from Goodyear were unable to offer a solution. 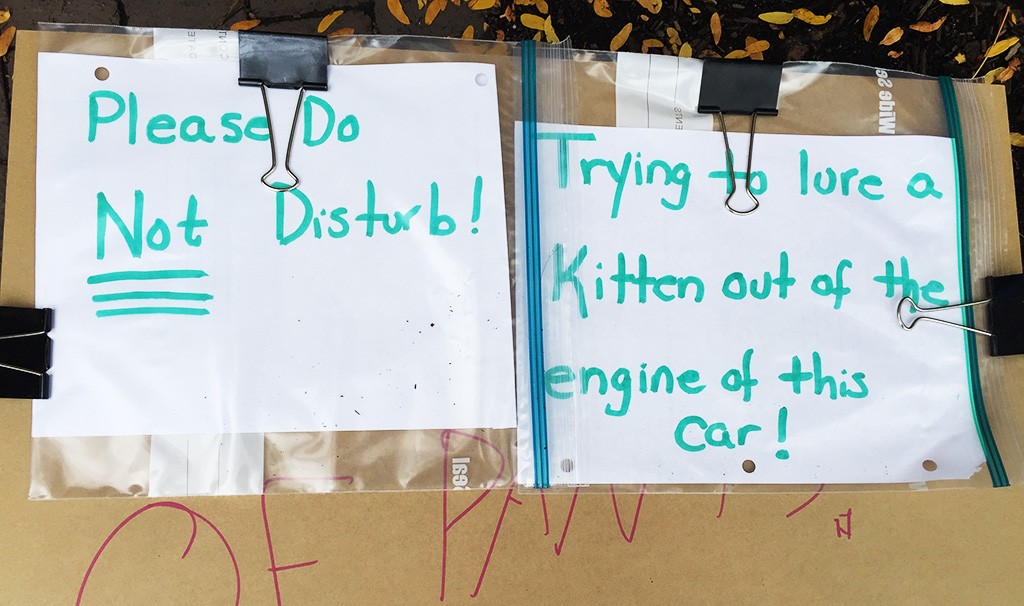 Something you don’t see every day

Lily:?And that’s when I knew this particular home was perfect. ?The engines on these newer cars are so buttoned-up… intruders?can barely get a paw in anywhere. ?Once I got comfortable, I wasn’t leaving.

UC: So they called in?New York State Wildlife Rehabilitator, Andrea French, who came decked out with gloves, net, and a have-a-heart trap baited with cat food. ?With no way to physically reach you, they left a sign on the car with the trap – while Kathleen and her friend Sarah Meda staked?out the scene – hoping?you’d get hungry enough to be lured out.

Lily: I’m not normally one to stay home on a Saturday night but it got?pretty nasty out. ?It was fit for neither human nor?feline that night… ?and I didn’t have an umbrella.

UC: In the meantime, Amanda and her fianc?, Adam made other transportation arrangements and went off to become Mr. and Mrs. Della Sala. ?Only to return the next morning and find the trap empty, but?you still occupying the engine compartment.

Lily: Well,?it rained most of the night. ?And?I tend to sleep late. 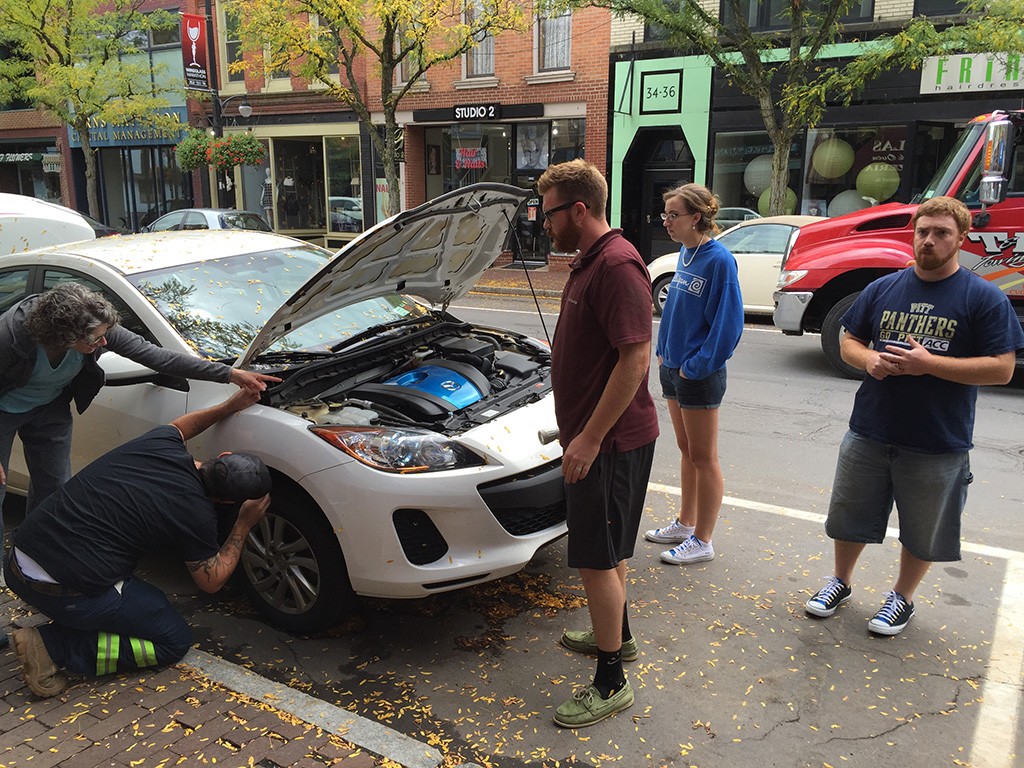 UC: You understand they really just wanted to get home to Rochester after a busy weekend?

Lily: I get that.. now.??But I was still half asleep. ?And?by the time I fully awoke, there was a?huge crowd, a?tow truck, the police… it was all just too much.

UC: You did not come out willingly, but had little choice once the car was surrounded and some panels were removed -?giving them access to your hideaway.

Lily: Yes, apparently the “long arm of the law” is not just an expression. 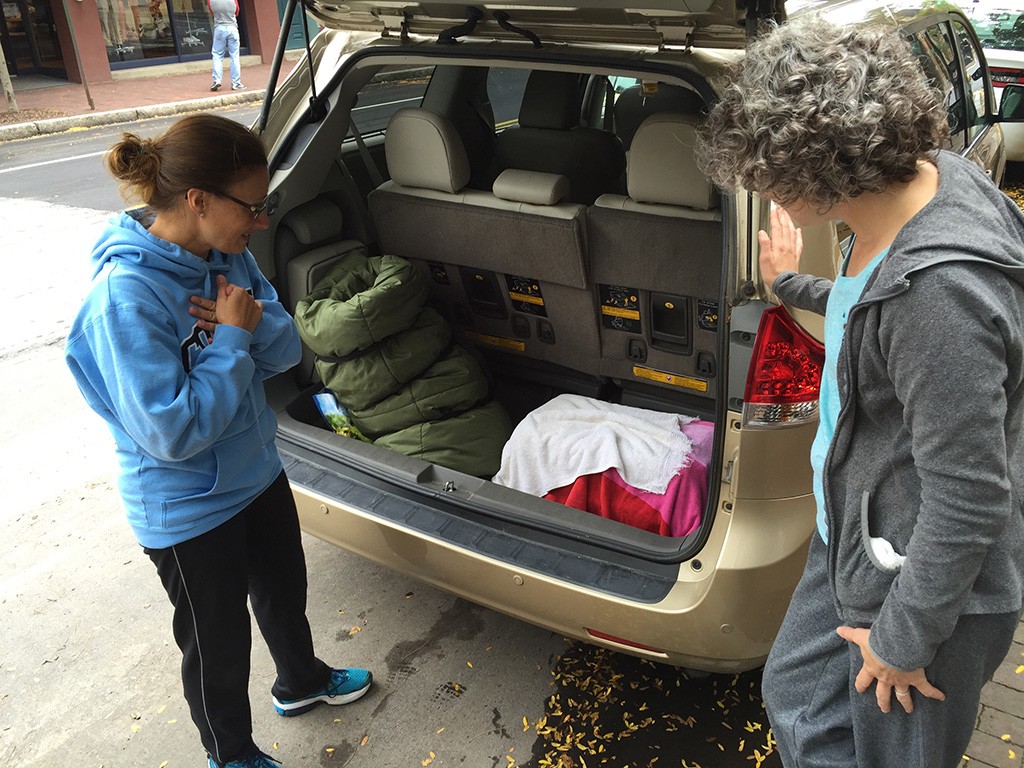 UC: Kathleen took you back to her place in a nice blanket-lined pet carrier. ?Now you’re safe and sound in your new home – which is an actual home.

Lily: Yes, and I will admit it’s nice having?the extra space to stretch out in and explore. ?For some reason they won’t let me near the garage though… 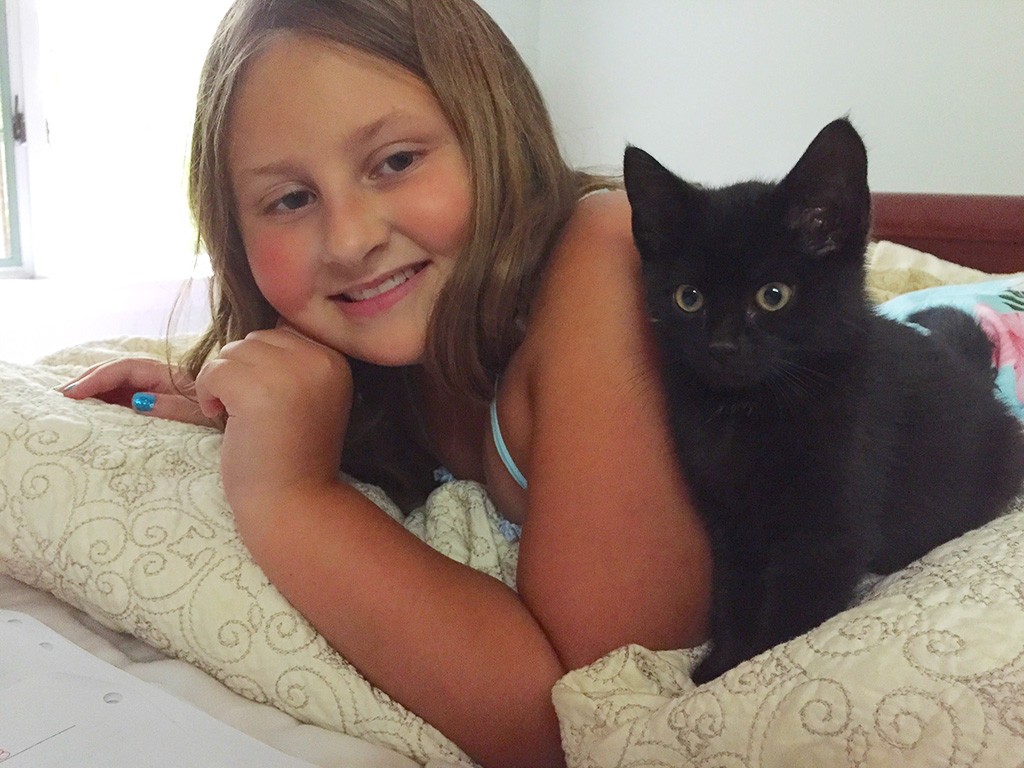 Lily with Gracie – one of her new owners

UC: Do you like the name they gave you, Lily?

Lily: It’s better than what everyone was calling me.

Lily: I did hear something about getting “fixed” soon. ?Funny, I didn’t know I was broken. 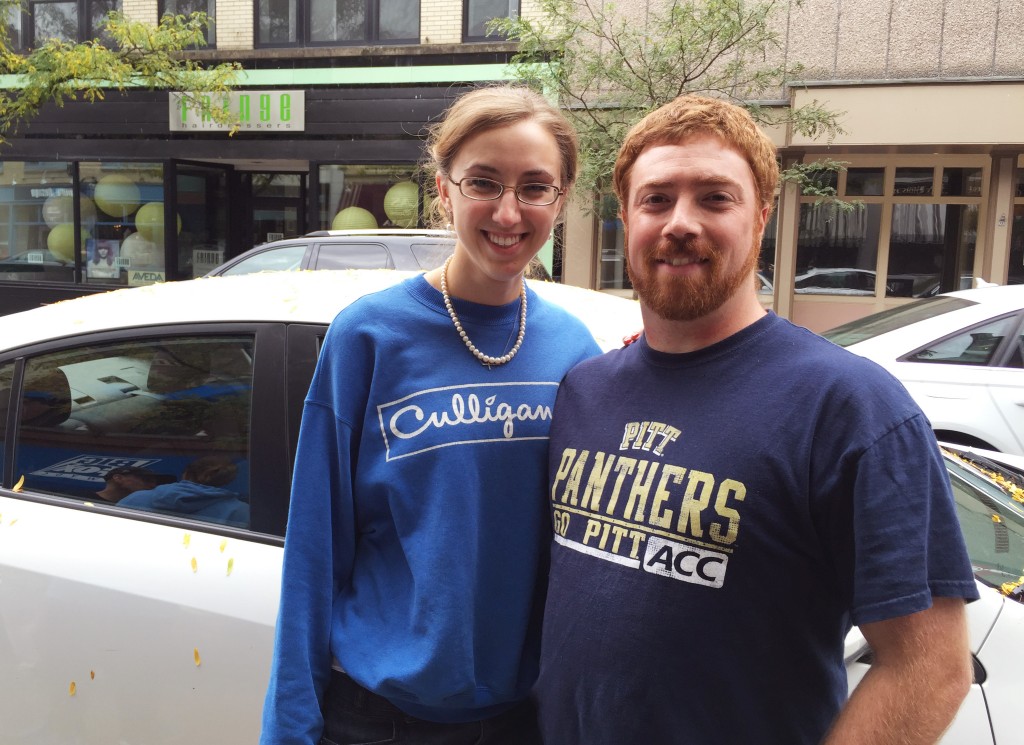 The happy (and relieved) couple – Amanda and Adam Della Sala 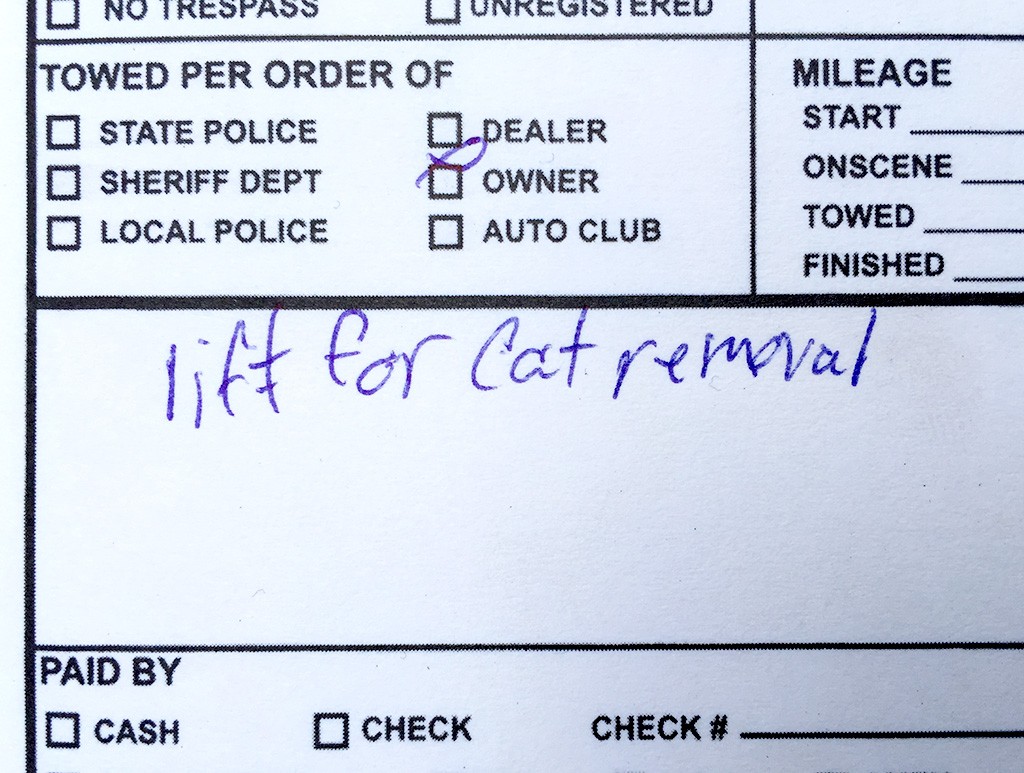 Tow-truck receipt – does this qualify as a blog-expense?

Editor’s note: ?Lily may have found a loving family to keep her, but she will not be having a family of her own since she?will be spayed soon. Help control the over-population of cats in our area. ?If you have?stray cats roaming your neighborhood, contact Carmela Bertron at TLC TNR.