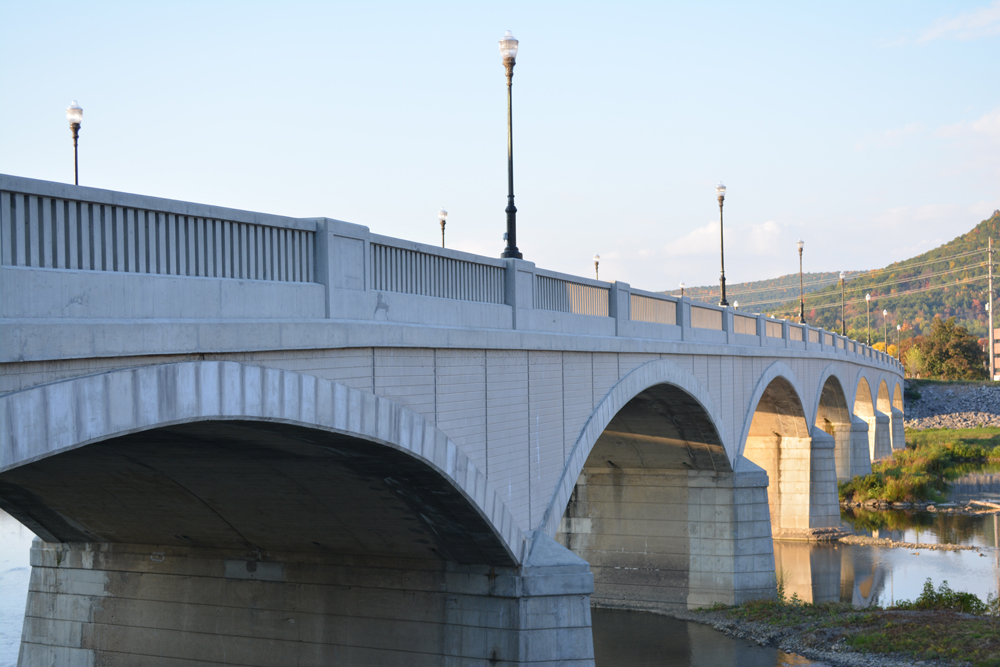 Corning’s Gaffer District just announced that the Historic Centerway Walking Bridge has been named the American Public Works Association (APWA) Historic Restoration & Preservation Project of the Year! Okay, so it’s not a Grammy and it’s not exactly the Most Fun Small Bridge in America – although it should be. But it’s still pretty cool because the APWA is nation-wide and our?local members are part of a group of over 28,000 public works professionals who are all looking for this kind of attention and recognition. Too bad for them.

The best part is that we didn’t take our single award and go home. This restoration project was also awarded APWA Project of the Year at the chapter and state levels; the project was?given the 2013 Bridge Award by the Western New York Chapter of the Association for Bridge Construction & Design (ABCD) for a major project over $2 million, and the?Award of Merit from the International Concrete Repair Institute (ICRI) for the Historic Preservation category. 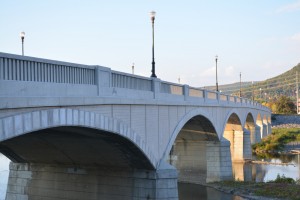 Here’s some of the background information about our nationally-recognized walking bridge:

Built in 1921, the 40-foot-wide, 710-foot-long structure originally served as a pedestrian and vehicular crossing of the Chemung River until 1979, when a new, steel structure was built adjacent to the bridge. The intent was to demolish the deteriorating concrete bridge until there was community outcry to preserve its historical integrity.

The structure acted as a pedestrian crossway for 30 years, until 2009 when the bridge began to show signs of significant deterioration and the City of Corning recognized the need for a major rehabilitation. In a unique partnership among the City of Corning, Corning Incorporated, Corning?s Gaffer District and the New York State Department of Transportation, funding was amassed to preserve the historic structure as a pedestrian crossing.

The restoration project, completed in November 2013, included the work of many design firms, contractors and engineering agencies. Fisher Associates of Rochester, NY handled extensive evaluation and testing of the bridge, as well as design, engineering and construction inspection, while CP Ward Inc of Scottsville, NY, acted as the project?s general contractor. Trowbridge Wolf Michaels Landscape Architects of Ithaca, NY, was a subconsultant of Fisher Associates responsible for the landscape and amenity design on the bridge. Ravi Engineering of Rochester, NY also assisted with construction inspection as a subconsultant to Fisher Associates.

New and interesting features of the bridge incorporate the history and the environment of the Corning area and Chemung River Basin. The bridge acts as a walking park with green lawns and perennial gardens. The space also strives to be educational, community friendly and interactive with bronze animal tracks, a maze, glass pavers and fun horizontal stripes to break up the pavement.

A sprinkler system on the bridge facilitates maintaining the plantings during the summer months. An intricate drainage system under the deck collects the surface water and conveys it to the river below to prevent water from infiltrating the concrete arches.

So next time you walk over that bridge, make sure you stand a little straighter and truly strut your stuff through the Centerway Maze because it’s all nationally-acclaimed.